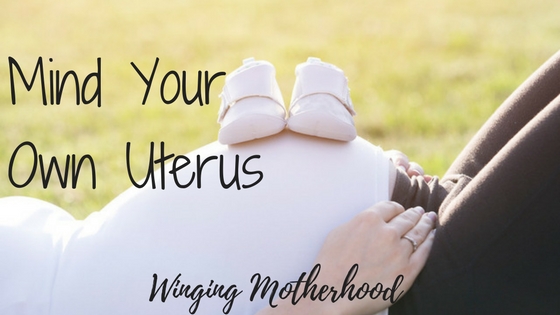 I thought the fascination with the status of my uterus would end when I had my daughter.

If anything the fascination has only grown. Maybe the assumption is that it’s safe to inquire now that I have a child, so I’m clearly willing and able. But what if I’m not?

Did you forget how babies are made?

Why is something so incredibly personal always exempt from the list of conversation topics that are considered socially acceptable? You wouldn’t walk up to a stranger and ask her about her ovulation schedule, not without being considered a total creep anyway. While you may discuss some of the details of what happens between the sheets with your bestie, it’s not information you share at the dinner table. Does anyone really want to know about the consistency of cervical mucous or latest basal body temperature reading? I didn’t think so. But these are the details you might be inadvertently asking about when you ask a woman about putting a bun in the oven.

There are a lot of articles that discuss being sensitive to women who don’t have children. About minding your own uterus. You never know if someone is newly pregnant, just had a miscarriage or recently found out that their 5th round of IVF was unsuccessful. Or maybe they’ve decided they simply don’t want children and are sick and tired of being asked about it. Your seemingly innocent questions aren’t always harmless. And those of us who already have a child? We might want to be left alone, too.

My husband and I didn’t do anything in a hurry. We dated for 8-1/2 years before he finally proposed. (Yeah, I know, I’m surprised I stuck it out for that long, too). A year later we were married. And it was the day before our 3rd wedding anniversary when we welcomed our baby girl into the world. I can’t even begin to count the number of times we were questioned about starting our family during all that time. And I don’t think she was even a month old before the questions began surfacing again, this time wondering when we’d be ready for another. Seriously, what is wrong with people? My vagina is still healing, my hormones are all over the place, please leave me alone.

But what I really said was we would likely wait until after her first birthday, and then we might entertain the thought of having another (and then mutter ‘not that it’s any of your business’ after they’d walk away). That seemed to pacify most people. But her first birthday came and went. And now that she’s almost a year and a half old the pressure this time around is almost greater than it was before.

Everyone seems to have an opinion on the appropriate age gap between children, and the general consensus is that I’m waiting too long.

Well listen up. I’m well aware of my daughter’s age. I commemorate every single month with a photo shoot. The wrinkles on my forehead and bags under my eyes that stare back at me in the mirror every morning remind me everyday that I’m not getting any younger. So I’m sorry if it’s TMI, but you did ask for it…the reason there’s no bun in this oven is not for lack of trying. I had hoped (and planned) to be pregnant again by now. Months ago actually. But breastfeeding has significantly delayed my return to fertility. It’s hard to fertilize an egg that’s not there. You can’t cook a bun in an oven that’s not turned on.

So when you tell me not to wait too long before having another baby, and I respond with a vague ‘yeah, we’re thinking about it’ and then quickly change the subject, what I really want to do is scream. Or cry. Or both. What you think is the simple offering of good advice is actually just another little twist of the knife, another blow to the gut. I know that I don’t speak for everyone who is trying to conceive, but I also know that I’m not alone when I say that when you’re trying to conceive, it consumes you. It’s in the back of your mind every waking moment and creeps into your dreams at night. There’s no escape or reprieve. It’s exhausting. And it’s not anything that someone who hasn’t experienced it could possibly begin to understand. So I forgive you for asking, for prying, for trying to be helpful, but please stop.

It’s not just the anxiety and resulting disappointment that comes with every negative pregnancy test. (By the way, don’t go broke buying those, these test strips are less than $0.50 a piece and they work just fine). It’s not just the seemingly endless waiting for another two weeks for another cycle to start until you can start trying again (or if you’re like me, the months and months of waiting for any sign of fertility at all). It’s not just the guilt you feel when you don’t jump for joy every time another person makes their pregnancy announcement on Facebook. (Why does it feel like you’re surrounded by pregnant moms when you’re trying to conceive?) It’s all of it combined, and so much more, especially the frustration you feel with your body for not doing what it’s supposed to do. For not doing what it was meant to do.

This isn’t my first go around with trying to conceive. I don’t have a sad-turned-happy story about years of fertility treatments resulting in a miracle baby. Those women are incredible. Their patience, persistence, dedication and determination amaze me. My first pregnancy ended abruptly at 9 weeks when we found out at my first prenatal appointment that there was no heartbeat. I think my emotions after that were probably normal considering the circumstances. I went from one day wanting to try again right away to the next day having no desire to even entertain the idea of another pregnancy. But we ultimately decided we’d try again as soon as I was able. It didn’t take us long, but those months in between were hard. I can’t imagine doing that for years.

There is definitely a difference in trying to conceive before you have children and trying to conceive after you’ve been through it already. Becoming a mom provided me with all the love and warm, fuzzy feelings you hear so many parents talk about. It is a feeling unlike anything I have ever experienced before. A love that cannot be put into words. But more than that, it gave me a sense of purpose. I felt like I finally knew what my reason for being was. Being a mother to my daughter (and any future children) will always be the thing that I am most proud of, my greatest accomplishment. I didn’t know what I was missing before. But now I know exactly what I’m missing. I’m aware of the highs and many of the lows that come with pregnancy, labor, delivery and the newborn days, and I’m ready for them. I would welcome them all, the good as well as the bad, with open arms. But my body isn’t cooperating.

So please, stop asking me when I’m going to have another baby. Mostly because it’s none of your business. But also because I’d really love to have an answer to give you, and it breaks my heart every time I have to dodge your question. When there is news to share, it will be shared. Until then, mind your own uterus.