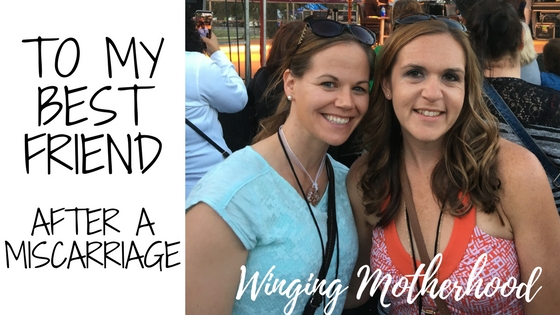 Those words have never felt so inadequate, so insignificant. Because I am so much more than sorry. I’m sad. And angry. And confused. And heartbroken. I love how much we have in common, it’s why we’re best friends, and have been since the third grade. But this was something I never wanted to have in common with you. It’s not a club I ever wished you’d have to join and unfortunately it’s a lifelong membership with no way out. If there was anything, ANYTHING, I could do to spare you the devastating grief that is to come, I would. You and I both know that it’s not something I’m going to be able to do. So instead I’m writing you this letter, with the hope that it will provide you with at least a little bit of peace during this incredibly difficult and dark time.

Not in the physical sense, though the few days following your D&C you might be a little uncomfortable. That’s not something I was prepared for. I thought I understood grief. And then I had a miscarriage. Everything I thought I knew about loss went right out the window. I wasn’t prepared for the physical manifestations that were brought on by my grief. The best way I can describe how I felt during those few months following my miscarriage was broken. My heart ached, literally ached as if someone had shattered it like a bullet through a pane of glass, but at the same time I felt empty. It didn’t make sense, how could my heart hurt if it felt like it was also absent? I couldn’t sleep. I couldn’t concentrate. I couldn’t eat. There were times when I felt like I couldn’t breathe. I couldn’t imagine ever feeling whole again. I don’t tell you these things to scare you or make you even more anxious than you already are, but rather I hope it softens the blow a little bit when the pain hits.

You’re going to be angry.

This was the emotion I despised the most. I didn’t want to be angry. And that only made me more angry. I had done everything right. I was the one of the healthiest people I knew. I was married. I owned a house with plenty of room for a growing family. I had a good job that would allow me to support a child. When I found out I was pregnant I didn’t drink a drop of alcohol, I took my prenatal vitamins and did everything else I was supposed to do. I followed all of the rules. And still I had a miscarriage. I was so angry at all of the women I knew who got pregnant on ‘accident’. Or all of the women who complained about their pregnancy or their children. Because I would have given anything to trade places with them. I would’ve taken the morning sickness, the heartburn, the swollen ankles and the stretch marks. I would’ve taken the sleepless nights, the diaper blowouts and the spit-up in my hair. I felt like a crazy person wishing for dirty diapers to change and vomit on my clothes. I just wanted them all to shut up. I knew it wasn’t their fault, most of them had no idea what I had recently experienced, but I was angry nonetheless. By the way, it’s okay to be a little angry, don’t beat yourself up over it, because it will pass.

You’re going to feel like you’re doing it wrong.

I really hope this doesn’t happen to you like it did to me, but if someone ever tries to insinuate that you should be ‘over it’ by a certain period of time, you punch them in the face. Or better yet, call me so I can punch them in the face. It’s selfish, but I’d love to feel like I’m doing something for you. Grief doesn’t have an expiration date. There’s no right or wrong amount of time to grieve. Nor is there a wrong way to grieve. But someone may think you ‘got over it’ too quickly if you’re smiling and having a good day and someone else may accuse you of grieving for too long if a month later you still cry for no apparent reason.

I no longer believe that everything happens for a reason. Miscarriages happen all the time and I don’t believe that God would ever create a life just to take it away so quickly as part of some master plan. Life simply isn’t fair. What I do believe is that if you look hard enough, you can usually find a bit of light among even the darkest of shadows. My own miscarriage taught me a lot about myself. I gained strength. I gained perspective. I really don’t sweat the small stuff like I used to and I never take for granted the good things in life. I grew closer to my husband – a situation like that can make or break a relationship, and for us it only strengthened ours. And I realized that I have some of the best friends a person could ever ask for, yourself included.

I know I can’t promise you this, so I’m not saying it with complete certainty, but when the time comes and you have your rainbow baby, the love you have for that tiny human is going to be so overwhelming you won’t feel as though your heart can hold it all. I may be biased, but rainbow babies are the best. They don’t erase the pain from a previous loss, but instead they allow you to love with a fierceness that is only made possible by that loss. Your future baby is going to be the luckiest kid to have you as a mom…and also to have me as an ‘aunt’ obviously.

I know that’s not enough, but I am. I’m sorry that this is happening to you. I’m sorry you joined the club. I’m sorry we have one more thing in common. But I am glad that I did it first so that you have someone to talk to, someone to confide in, someone who will never judge you because I understand.

Just remember, there’s no wrong way to do this. And I’ll be here for you every step of the way. 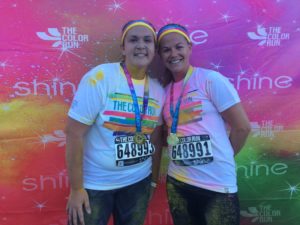