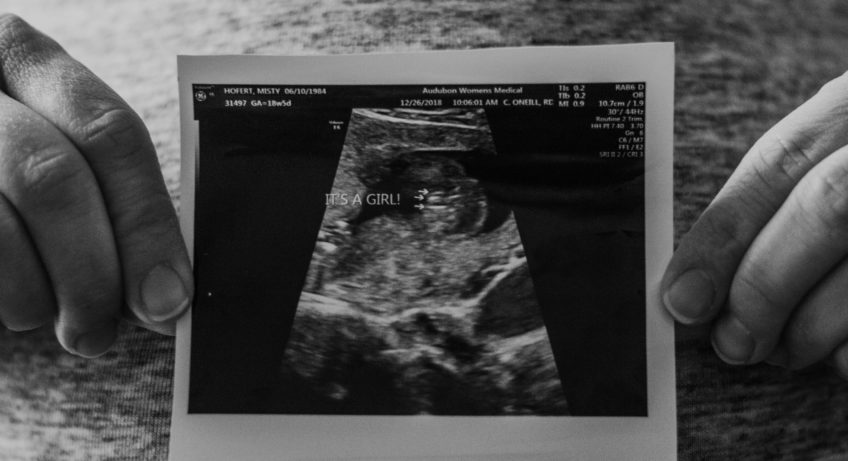 I had been googling gender reveal ideas for weeks. Saving all kinds of things to a private Pinterest board so that I wouldn’t spoil the surprise. My husband and I had even discussed names and talked about what we would do with the nursery.

Then the time came for my 18-week anomaly scan.

We waited anxiously as the tech looked at our baby’s anatomy from head to toe, ensuring us that the brain looked normal and the femur length was good. Okay, okay…that’s great, but let’s get to the real reason we’re here. After what felt like an eternity (really it was only 20 minutes), she asked if we remembered what the images looked like with our daughter. Because this was definitely another little girl. Definitely.

I had only told a small handful of people when my appointment was, and that we were planning to find out the gender, but hadn’t decided if we would share the news right away. Good thing. I didn’t have so many people pestering me that way. Those who did know, I told them that the baby didn’t cooperate and that I had to go back in a few weeks for another scan. This is in fact partly true, the heart chambers weren’t visible because of the baby’s position so I do actually have to repeat the ultrasound before my next appointment.

I can’t tell you how many people asked me if I was hoping for a boy or a girl this time. (For the record, my friends are terrible at predicting gender…almost everyone has guessed boy). And every time my answer was the same – I honestly didn’t care either way. Because I didn’t think I did. There were so many great things about both, and I would be happy with either. But that apparently was not the case.

All of those gender reveal ideas and Pinterest posts I saved, they were for a boy. The names we discussed? Boy names. We didn’t even consider girl names. And I don’t know why…I’m not one of those people who has any sort of sense as to what I’m carrying. I didn’t have an inkling that it was going to be a boy this time.

But I always pictured myself as a boy mom.

I imagined a living room littered with trains and trucks and a garage full of balls and sports gear. I envisioned attending little league baseball games and going to superhero movies. I was prepared for fart jokes and conversations about poop (which my sweet little girl is fulfilling just fine).

Girls can do all of these things, too, I know. So save your gender stereotyping lecture for someone else. I have two brothers and I was the sports junkie while they preferred to stay in and play video games. I didn’t care for dolls or dresses and would have much rather played a game of basketball in the driveway than sit around doing my nails or playing with Barbies. My dream car has always been a pick-up truck. I’ve been to more football games than I can count and was an NHL season ticket holder for years. Which is probably why I was looking forward to raising little boys – I have a lot more in common with them.

I love having a little girl.

My daughter is the very best thing that has ever happened to me. I love dressing her in pretty outfits with coordinating bows and sparkly shoes. I love watching her take care of her babies (but hope that she is a little more gentle with the real one we’ll be bringing home in a few months). I enjoy painting her tiny little toes and watching her twirl around the room when her favorite song…or any song…comes on. I love everything about being that little girl’s mom.

So the wave of disappointment that washed over me when we found out we were indeed having another girl really caught me off guard. If I hadn’t already been lying down, I probably would’ve hit the floor. It wasn’t the shock of finding out that we’re having a girl, but rather the sadness about it that sent a lump to my throat and knot to my stomach. Before we knew, I said I thought it would be really nice if my daughter had a sister to grow up with because that was something I never had. And I meant it. Sister bonds were always something I envied. So I couldn’t for the life of me figure out why I was so upset.

I felt like the worst mother in the world.

I held it together while we finished the ultrasound and in the waiting room until they called me back for my appointment with the OB. It was a good thing she was running late because as soon as I was left alone in the exam room, the tears that I had been holding back finally let loose and streamed down my cheeks. By the time she came in I had pulled myself together. And when she asked whether I was excited about another little girl or had been hoping for a boy, I just shrugged and said I wasn’t sure. She didn’t probe.

I came home that day feeling rotten. I had lost a baby before. I had a life-threatening pregnancy complication with my daughter. How could I be upset about this uneventful pregnancy and a perfectly healthy little girl? What was wrong with me?

But I’m not upset that it’s a girl.

It took me a few days, and a lot of reassurance from some incredible mom friends, to stop agonizing over my initial reaction. I’m not upset that we’re having another girl. I get to unpack all of those adorable girl clothes that I was really sad to keep putting away every few months. My daughter gets to grow up with a sister, a built-in best friend. She’ll have something I never had. I’m really looking forward to watching their bond grow. And I get another chance to be the best mom possible to a second beautiful baby girl.

My angst was not due to the fact that this baby is a girl. It was because I was mourning the loss of the life I thought I was going to live. We don’t know if we want any more children after this. So I may not get to raise the little gentleman I had always dreamed of raising. I may not have a son to dance with at his wedding. I may never get to see a miniature version of my husband grow up. If my miscarriage taught me anything, it’s that you can both grieve and love at the same time. My first daughter wouldn’t be here were it not for that loss, which was a difficult concept to wrap my mind around because the grief ran so deep, but I love her so fiercely.

It doesn’t make you a bad person. And it doesn’t mean you don’t love your child. I’ve come to learn that I’m not alone, though I certainly felt like it at first. I’d probably still be crying myself to sleep had it not been for those friends who shared their experiences with me and reassured me that I was not a horrible, heartless mom. So as much as it pains me to share these thoughts, and as ashamed as I was to admit my own feelings of gender disappointment, they’re real. And honest. And normal.

But I know I’m going to love this baby girl just as fiercely as I love her big sister. In fact, I already do.