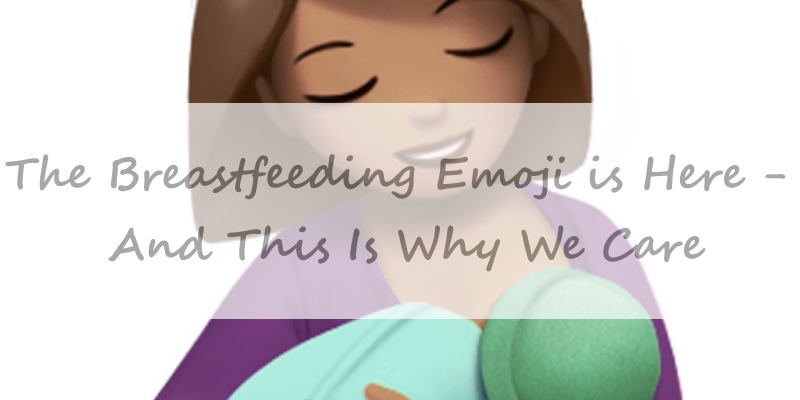 The breastfeeding emoji that we’ve been teased with for months is finally here. If you’ve updated your phone recently, you’ll find it, along with about 70 other new emojis, ready to be used and shared in text messages, e-mails and social media posts. So why do we care?

Breastfeeding rates are up in the United States, but there is still work to be done. The World Health Organization recommends exclusive breastfeeding for 6 months, with continued breastfeeding along with appropriate complementary foods up to two years of age or beyond. According to the CDC Report Card from 2016, among infants born in 2013, 4 out of 5 (81.1%) started to breastfeed, 51.8% were breastfeeding at 6 months, and only one third (30.7%) were still breastfeeding at 12 months. This drop in the rate of breastfeeding at months 6-12 indicates that mothers want to breastfeed, but may not be receiving the support they need to continue for the recommended amount of time.

Since the Baby-Friendly Hospital Initiative began, we’ve seen an increase in the percentage of births occurring at hospitals considered Baby-Friendly, but the rate remains low (18.3% in 2016).

So what are the barriers women face that keep them from breastfeeding?

Lack of knowledge – most women in the United States know that breastfeeding is the best source of nutrition for infants, but they don’t know WHY. Furthermore they don’t know the risks associated with NOT breastfeeding. Because breastfeeding is ‘natural’ it is often assumed that it will come natural, but this could not be further from the truth. Breastfeeding, I have learned, is an art. Something that must be taught and practiced. It’s the hardest thing I have ever done, but I’d do it again and again.

Social norms – in the United States, bottle feeding is viewed by many as the “normal” way to feed infants. There are mothers who want to but cannot breastfeed, and mothers who simply choose not to breastfeed, so there is nothing wrong with using formula to nourish your infant, but it’s not the “normal” way. The ‘breast is best’ vs ‘fed is best’ debate shouldn’t be a debate at all. Breast is not best – it’s what’s biologically normal. Fed is not best – it’s the bare minimum required for survival. Enough already. We’re too worried about who we offend these days and it’s affecting our most vulnerable population. By promoting and encouraging breastfeeding, no one is shaming mothers who are incapable of or choose not to breastfeed, but that’s how this over-sensitive culture we’ve created views it sometimes. We should remain sensitive to mothers who try and cannot, because a terrible sense of guilt and failure can accompany the inability to breastfeed. But we also shouldn’t allow the formula companies to push their substitutes for human milk and deceive us into thinking their products are equivalent.

Poor family and social support – this one is straightforward. If a woman has friends or family members who have breastfed successfully they are more likely to choose to breastfeed. On the other hand, negative attitudes about breastfeeding act as a barrier.

Employment and child care – this is a big one, especially in the United States where we are truly failing our new mothers and in turn our babies.

Barriers related to health services – this one is truly concerning. We rely on our health care providers to support and guide us but clinicians themselves admit that they have insufficient knowledge about breastfeeding. Health professionals are included in the population of people who believe that because commercially prepared formula has been enhanced in recent years, it is equivalent to breast milk in terms of its health benefits; however, this belief is incorrect.

Embarrassment – this right here. THIS is why we care about the breastfeeding emoji. Because there is something we as a culture (yes, every single one of us) can do to increase the rates of breastfeeding in the United States. We can NORMALIZE it. We can stop making mothers feel ashamed to feed their child in public. We can stop asking them to cover up or hide in bathrooms. Because guess what, babies get hungry and they don’t care where you are or what you’re doing. We can support our moms who are trying their hardest to nourish their child even when they’re forced to return to work after 6 weeks (sometimes sooner). If you have a coworker who you know is pumping at work, offer to help her out once in a while – run an errand, make a phone call, pick up lunch at the cafeteria…anything to save her a few minutes, because those minutes are precious. It’s not easy to drop whatever you’re doing every three hours and pump.

You’ve probably seen the #normalizebreastfeeding hashtags on Twitter, Facebook and Instagram – because we really do need to normalize breastfeeding. Social media is taking the world by storm. The world I grew up in is going to be vastly different than the world my daughter is currently growing up in. But we can use for good, it doesn’t have to be all evil. News travels faster than ever. And if the news we’re spreading is good, positive news, we might actually be able to make this world a better place. So use the emoji, share the emoji, post the emoji. Because breastfeeding IS normal, we just have to spread the word.