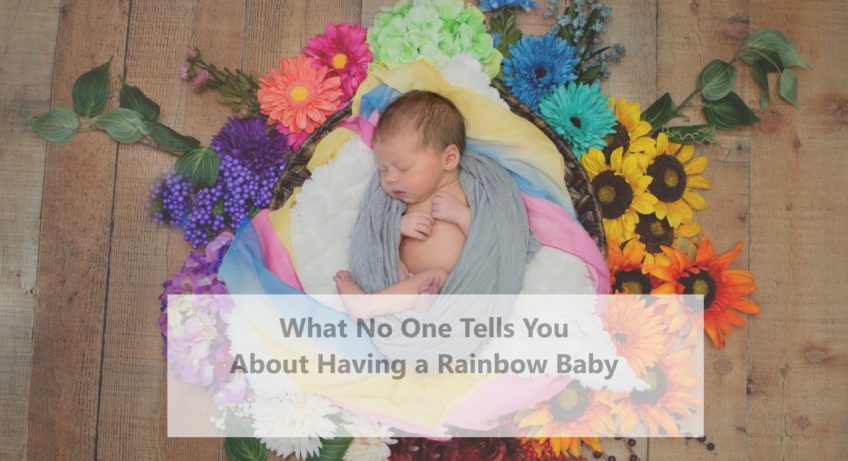 “You can’t have a rainbow without the rain.”

That phrase took on a whole new meaning for me last year when I was pregnant with my rainbow baby. I didn’t even know what a rainbow baby was until I was a few months into that pregnancy. I can’t remember exactly how far along I was, somewhere in the first trimester I think. I was scrolling through Facebook and I came across an article with the most beautiful  pregnancy announcement photos I had ever seen – rainbow baby pregnancy announcements. Gorgeous shots of women draped in rainbow gowns or with smoke bombs of every color swirling behind them. I was instantly brought to tears. I could relate to these women. They were complete strangers, but somehow I felt connected. Pregnancy loss is funny like that. It’s a club no one wants to join, but once you’re there you instantly become family. Because it’s not something you can possibly understand until you’ve experienced it firsthand.

It’s not a feeling I would wish upon even my worst enemy.

But there I was, a few months into my second pregnancy, reading about the beauty of the rainbow baby. I somehow started to love the little bun in my oven even more.

The article went on to talk about all the things you might feel while pregnant after experiencing a loss.

You might feel guilty, especially if your pregnancy following the loss wouldn’t be possible if you hadn’t had that loss in the first place. This was the case for me. My daughter was born exactly 4 months after I would have been due with my first pregnancy. She wouldn’t even exist had that pregnancy not resulted in a miscarriage. How could I grieve that loss, and yet still love her so deeply? Somehow it’s possible to feel both at the same time. It’s something you learn to accept.

You might feel lonely. Pregnancy loss isn’t something that’s talked about. At least not out in the open. There seems to be a push lately to ‘normalize’ pregnancy loss and reduce the stigma around it, but I don’t think that’s it at all. Not for everyone, anyway. Some women just don’t want to talk about it. Not because they feel ashamed. Not because they feel guilty. Not because they don’t have anyone to talk to. Sometimes you just don’t wan’t to talk about the things that remind you of the darkest moments of your life, even if you have people willing to listen. And that’s okay. It took me months before I could utter the word miscarriage. And even now, when the topic comes up, I feel the tears begin to well. The birth of my beautiful daughter has certainly brought me great joy, but it doesn’t erase those months after that loss. They are buried deep and most days they stay there, tucked away but never forgotten. And then there are times, out of the blue, when a thought or memory will come to the surface and I am reduced to a puddle of tears. Because there are dates that are significant to me and only me. The date I learned I was pregnant, the date I learned that I had miscarried, the date that I was supposed to be due. Every year these dates come and go, and no one pays them any attention, not even my husband who went through it all with me. Not even my best friend, whose shoulder I cried on more times than I can count. Even though my loss happened early, well before we knew the gender or began to make any preparations, there was still a connection that formed, a bond that had been made. I felt as though I became a mother the moment after taking my first pregnancy test. So unlike losing a loved one who has a life to be celebrated and a date that signifies when that life came to an end, oftentimes you’re the only one who will remember the life lost each year.

You might feel anxious. You made it through your pregnancy. You made it through the delivery. You’re home with your brand new baby. The anxiety that surrounds a pregnancy after experiencing a loss is no joke. People are tempted to say you’re past the point where you need to worry when you enter the second trimester, but that couldn’t further from the truth. Because you will worry. You may not feel at ease until that baby is born and nestled safely in your arms. And even then you still worry. There are times now, at 13 months, when I check on my daughter to make sure she’s still breathing on the rare occasion when she sleeps through the night. I’m sure moms who haven’t experienced a loss do the same thing, but it’s so hard to shake the fear that something might be wrong when I peek over the edge of her crib. And I’m not normally a glass half empty kind of person.

But you will love your rainbow baby. Fiercely. All moms (and dads) love their babies. I am not saying that you will love your child any more than any parent loves their child. It’s not more love. It’s not a greater love. But it’s a different love. A love that is only possible if you’ve experienced a loss in the past. And it will be the most amazing emotion you’ve ever felt. Because you know what it’s like to have loved and lost. You’ve weathered the storm that is the grief after experiencing a miscarriage, stillbirth or infant loss. You’ve walked through the rain, you’ve survived the thunder and the lightning, you’ve waited out the clouds…and you’re left with the ability to love so deeply it hurts. So be prepared for your world to shift. Be prepared for your heart to ache, not with pain but with love.

That’s what no one tells you about having a rainbow baby. But it’s the best part.